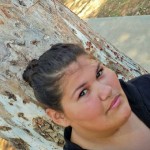 Hey I’m Amy and im 15 years old and I live in Mataranka but I go to school at Jilkminggan. Im originally from down South, I was born in Port Augusta, a town at the top of the gulf in South Australia, but as I got older I moved around a lot. The places that I moved to were: Coober Pedy & Quorn, then back to Port Augusta again.

In my family there’s mum, Sonja, dad, Nick, I’ve got 1 sister called Belinda, she’s 19, she’s the oldest out of 4 kids, & 2 brothers, the oldest out of em is called Matthew, he’s 18 and has a very gorgeous baby girl called Rose, & my other brother Nick Jnr AKA Booka, he’s 12, he’s very funny but some times he can be really annoying.

The usual language that I speak is English but I also speak Adnyamathanha. Adnyamathanha people come from the Flinders Ranges, 40km from North Port Augusta.

In my spare time I like to swim at the springs, listen to music, draw or just chill.

I’m not really sure what I want to with my future but as I get older ill probably figure it out.


My Community 
 All The Communities